Check out the fifth episode of the independent comedy web series Nicolife!

In Episode 5, Nicolai reconnects with his eccentric sister Nikita. He also has a run-in with a group of thugs who come to collect an outstanding debt.

During the making of Episode 5, we had the opportunity to work with a Phantom 3 drone, which was a blast! We also inflicted various scrapes and bruises on our actors during the fight scene at the end of the episode (sorry, no stunt doubles on a zero-budget production!) The web series Nicolife tells the story of Nicolai and Phil, two attention-starved nobodies who desire fame and fortune above anything else. Unfortunately, their social ineptitude lead them down a path of immense tragedy and untimely death. The show is a satirical look at the egocentrism of our YouTube generation.

I’ll update this post with behind the scenes videos and pics in the coming weeks.

Behind the Scenes Pics

Behind the Scenes Pics

Hey, thanks for showing an interest in our project, Kim!

Episode 5 was a fun and exciting shoot. We always try to stretch and challenge ourselves in new ways to continue to grow as filmmakers, and I think we succeeded in doing that! 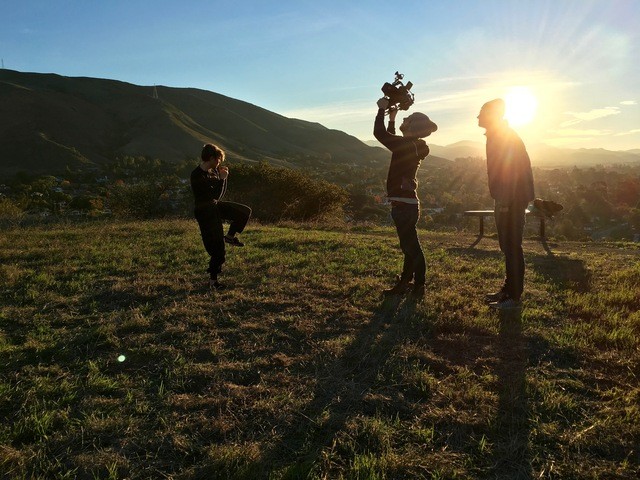 For this shot, we climbed a hilltop at break of dawn to capture a kung fu routine against a beautiful sunrise. There were only three people present for this shoot: the main actor as well as our DP and the director. 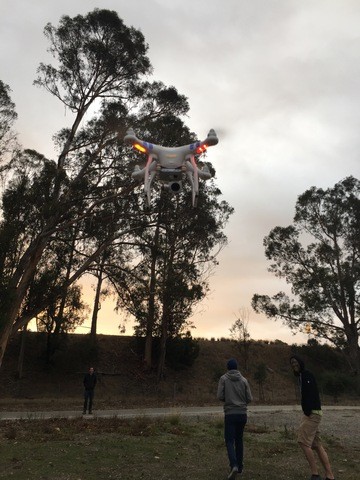 On this episode, we had our first experience working with a drone. A friend of the production team had just bought a Phantom 3 and offered it up for us to use. I thought long and hard on whether we actually needed a drone shot and came up with the two shots featured at the beginning of the episode:

1) one overhead shot of a jogger, and
2) one sweeping shot that tracks the jogger from behind and then swoops past her and pushes into a close-up of Nicolai and Phil who are hiding on a hilltop.

It was important to me that the drone shots supported the storytelling and didn't come across as too gimmicky. In the end, I think the final drone shot became an exciting way to re-introduce the audience to Nicolai and Phil in Episode 5. 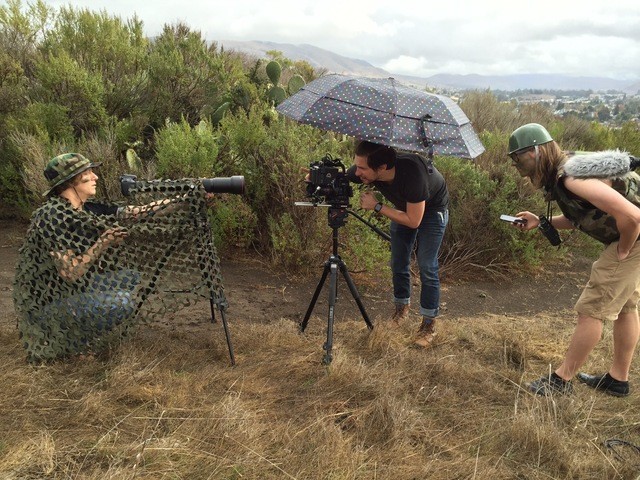 Unlikely as it is here in California, we were hit by some rain (!) during our shoot on Madonna Mountain, where Nicolai and Phil are hiding out. But with an umbrella to protect our equipment and the will to withstand the weathers, we made it through! 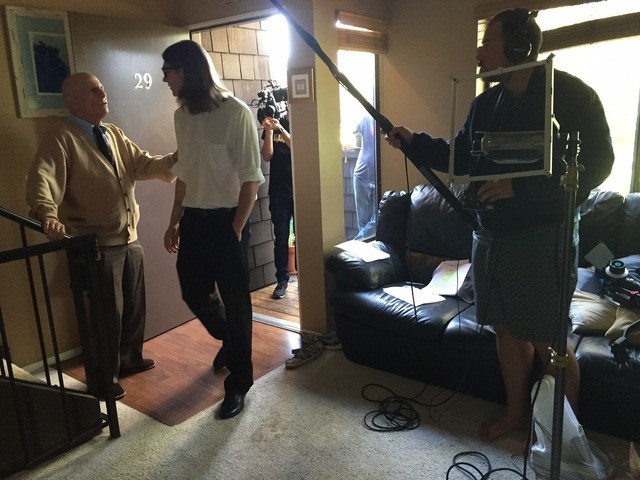 Most of this episode was shot at a friend's house, which became Nicolai's Dad's apartment. We rearranged all the furniture in the house to create spacious areas for lighting rigs and camera movements. We typically had 3 actors and a 6-person crew behind the camera.

Our location for all exterior shots at the end of the episode when the thugs show up was outside our DP's apartment. The thugs consisted of friends, who volunteered to help us out in exchange for food and good company. It was fun to capture the arrival of the thugs in a single shot, although that required us to practice the blocking for quite some time. We got the final shot on the second take. Because of the wide angle of this shot, we weren't able to capture good sound during this sequence, and therefore had to create all the audible tumbling and groaning and moaning and screaming after the fact, which provided us with a lot of post-audio work!

Let me know if you have any other questions about the shoot.

Staff member
Thank you very much! I think the drone shot works well and looks very professional. Are there any well known films or Shows you based your series on? Also, can you tell us about the editing process?
N

Kim Welch said:
Thank you very much! I think the drone shot works well and looks very professional. Are there any well known films or Shows you based your series on? Also, can you tell us about the editing process?
Click to expand...

In terms of the comedic tone, I drew inspiration from the TV shows Curb Your Enthusiasm and the British version of The Office. For the overall storyline, we were inspired by meta storytelling found in movies like Adaptation as well as movies/TV shows that feature violent protagonists, such as Taxi Driver and Breaking Bad.

Each individual episode uses visual references and influences from various movies, such as a Point Break-inspired chase scene in Episode 3.

Our Director of Photography edited the first episode, and I edited Episodes 2-6. My process is to quickly get a first rough cut done. I always use a temporary soundtrack, because I love to edit to music. Then, I try to tighten the edit—remove unnecessary scenes, cut tighter dialogue etc. When I start to lock down the edit, I begin to involve our composer, Micke Bäck, who writes original music, partially inspired by the temp music I've picked.

Once we've reached a final cut (after input from the rest of the production team), Micke composes and records the final version of the soundtrack, while I work on audio: sound effects, mixing dialogue, recording ADR etc. Our DP, Jason Kaiser, is responsible for color correction and color grading.

That's pretty much our process!
N

OK, guys, here's a behind the scenes clip from the making of Episode 5. It'll give you a glimpse of what it was like for the cast and crew during production.

Hey, thanks so much! We always appreciate when someone checks out our episodes.

Staff member
Did you enter our Summer Shorts video contest? The deadline's extended and we're accepting videos through Oct 15. The winners will be announced and screened at NAB New York, Create FWD Stage on Oct. 18th, with screenings of the winning films. If you have any videos that you'd like to submit (video entry must be 7 minutes or less), it's free to enter when you post a link from our contest site to your twitter or facebook, there are wonderful prizes from our sponsors, and you have a chance to screen at NAB NY. Here's the contest site and community: http://www.summershortscontest.com
You must log in or register to reply here.